​The season is turning a page here in the Mandal valley! After five months of summer, trees are starting to shed their leaves. Yesterday night the langurs slept at their western mountain range sleeping site, beyond Siroli village. This site has a full view of the valley below; thus, I perch myself at a location in the area from where I can see Siroli village below and Sanso village next to the terraced agricultural fields on the eastern mountain range. Heavenly, Rudranath peak to the north seems to be quietly looking down on Mandal valley. Prior to my daily behavioral observations of the langurs, I gaze into valley for a little while longer.  I could see women harvesting their matured finger millet, youngsters getting ready for school and men taking their cattle off for grazing in the nearby forest. At this moment, the valley is filled with the resonating sound of women chatting to each other in the fields, the sound of bells on the necks of wandering cows and the morning call of the blue whistling thrush. Far to the east, the forest above Sanso village is sprouting fresh new red and yellow foliage, which looks dazzlingly beautiful due to the reflection of the morning golden beams of sun. After taking in this riveting view of the valley my eyes move over towards the calmly sleeping adult female Geeta and her 2 years old son Gabru.  Geeta is around 12 years old, with slightly blackish fur around her chest, a sign of ageing in Himalayan Langur. They were sleeping together on a forked branch on a dwarf oak tree about two feet from the ground. Gabru had his head placed on Geeta’s right thigh, closely snuggling and Geeta had both arms wrapped around him. It felt sort of strange seeing them sleeping so peacefully after the traumatic evening they had yesterday.

Yesterday, while shifting from their sleeping site at Gondy village to Siroli village they were harassed by domestic dogs and people.  As a consequence the group was separated into two groups. Last night was not a regular night for them, some individuals fortunate enough to cross Gondy village could sleep at their Siroli village sleeping site.  Those remaining on the other side of the river settled into the sleeping site around Gondy village. I have been following Geeta’s group of 78 langurs for the past four years and named it Group S. I have spent a prolonged period of time studying each individual in the group, so that now I am able to identify each one of them by sight and know each one’s unique personality. This group has a home rage of about two square kilometers in which there are 14 fixed sleeping sites. Every night the langurs sleep together as a group at one on these fixed sleeping sites, rotating sites from time to time. About forty percent of their home range is agricultural farm land with five small villages spread over the area.  Because of their close proximity to humans, they frequently interact with villagers and domestic dogs. Domestic dogs are primarily trained to chase langurs off their agricultural fields, but eventually they have become main predators of the langurs. Over the past two years, I have witnessed seven individuals being killed by the dogs, and another eight severely injured by them. Group S’s interaction with people is frequent, though some part of their home range are more dangerous that others, and Gondy village is one such place.  Gondy is a small village encircled by natural forest on three sides, with the fourth side being a river which separates it from other villages in the valley. Gondy is located at the edge of the western most range of the group. On the right side of Gondy there is a sheer cliff ridge which creates an open corridor to the mountain side of Siroli village. One of the reasons why this area is so prone to dog attacks is the lack of continues tree cover in this corridor for langurs to safely move off the ground.  Additionally, its close proximity to the motor road and Gondy village sets the langurs up for harassment by human when moving through this area.

Yesterday night’s separation from the main group could be linked to their previous experience of crossing this corridor. Last time, nearly 22 days back, when the langurs crossed this location they had a dreadful encounter with dogs. That time it was an adult female, Sheeta, that got seized by a dog while trying to cross the road. Sheeta had her two-year old juvenile named Shalu along with her during the encounter, but she was saved. Yesterday at 5:12 pm when the langurs were at the same spot were they were chased by the dog that previously killed Sheeta.  Around 15 langurs were able to cross the corridor and arrive safely to the Siroli sleeping site before being spotted by the marauding dogs. Later they were spotted by villagers who shot rocks at them with catapults. In the middle of all this a few individuals took the risk and fled to safely join the others who had already arrived at the Siroli sleeping site. It was getting dark by this time and there was not enough time for the remaining individuals to flee to safety and join the main group.

The last time when Sheeta’s life was taken by the dogs, her two years old adolescent was left alone isolated from the group. As I recollect about all this now, I remember seeing him sitting alone sitting on this dwarf oak tree. It was a strange feeling to see Geeta and Gabru sleeping on that very same oak tree this morning, snuggling up to each other, perhaps both very grateful to have another morning together.  That morning, the day after the death of Sheeta, her juvenile had no one to cuddle up next to and sleep with, like Gabru is having today on 10th October 2018, in the Siroli village oak patch.  I continued watching Geeta and Gabru for another 20 minutes with this thought in my mind.

Down in the valley, peasants are working in their farm fields, some began to head back towards their homes, and on the cliff, langurs are still waiting for the rest of their group members stuck in the Gondy village to start their day! 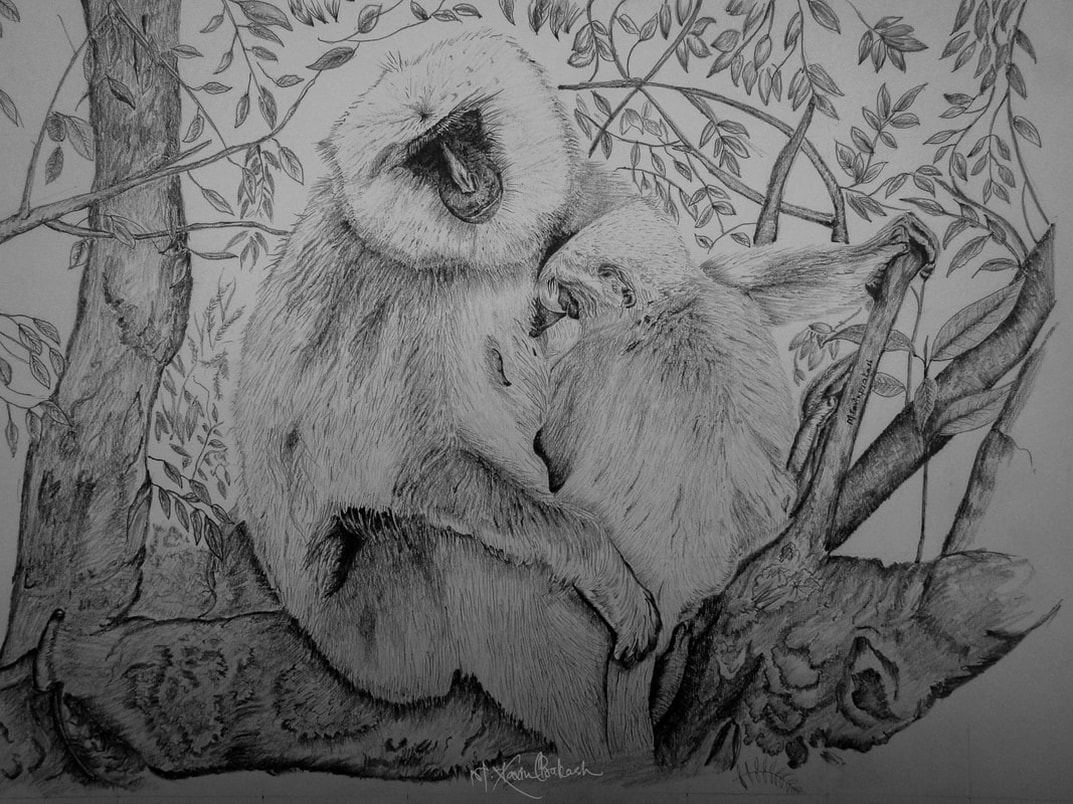